Geeking Out on Local History

Hi. My name is Liz, and I'm a history geek. There, I've said it! I feel much better now!  (I'm also really wordy; I know "they" say blog posts should be short and just show pictures.  Eh, that's not for me. I'm wordy. Always have been, always will be. Besides, if you want to really get to know me, these posts are ME. No artificial writing for search engines, or saying what I think people want me to say. This is me. But if you just want to look at the photos and skip my wordiness, feel free to scroll down - I'm good with that, too!)

I grew up in Saudi Arabia with my parents and my two brothers, and one of my parents' favorite recreational activities was to take us to historical sites around the world.

Which sounds really cool, right? In hindsight, yes, it was totally cool. However, in addition to standing on what is left of the steps of the Roman Senate proclaiming, "Friends, Romans, countrymen, lend me your ears", and walking up to the Acropolis in Athens, I have very distinct memories of tramping through some farmer's field in England, in the rain and fog (of course) to look at some grass-covered mound, with another, bigger grass-covered mound and my Mom standing in her London Fog trench coat, pointing at a paragraph in a guidebook with leather-gloved hands, assuring us that the mounds were a part of Hadrian's Wall, and a related watchtower.  (To date myself, this was long before there was a concerted effort to excavate Hadrian's Wall and before the National Trail along Hadrian's Wall existed - although if you want to see what I imagined we were looking at through the rain and the growing darkness, check out Hadrian's Wall Country).  As an 8 year-old kid, it was not as interesting as it could have been.  But I'd love to go back now!

One of the cooler trips we ever took was in Saudi Arabia, where we traveled along the Hijaz Railroad.  If you've ever seen the movie Lawrence of Arabia, the trains they were blowing up were on the Hijaz Railroad, and that all really happened.  (And if you haven't seen Lawrence of Arabia, go watch it. Seriously. One of the great epic movies of all time, and had everyone who was everyone in it, including Alec Guinness (aka Obi Wan Kenobi) and Omar Sherif, not to mention Peter O'Toole, of course!)  Having seen the movie and then climbing around the trains rusting in the desert, and through the old Turkish forts, it was very easy to imagine the Bedouin attacking the Turks just over the next sand dune.  Even at 9 years old, I knew I was stepping back in time!  (Yes, this is me, as a young child, climbing around one of the old engines. Seriously, it does not get cooler than this!) 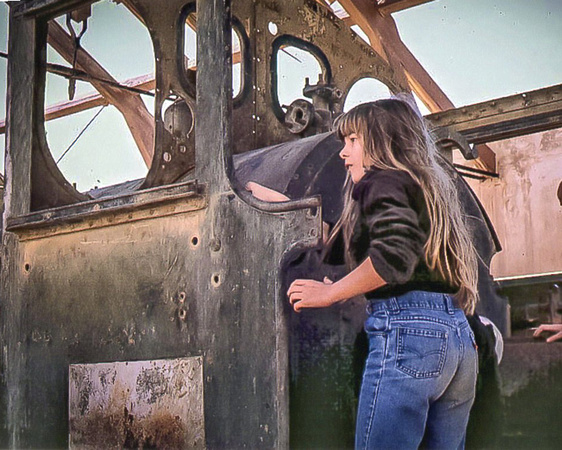 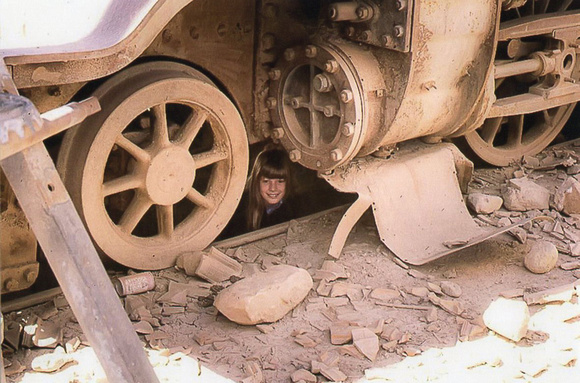 My parents are very cool people, and in hindsight, I am amazed at all the fantastically cool places we visited, even if I didn't fully appreciate everything I saw at the time.  Luckily, my parents took a lot of photos, and I can travel back in time to those trips and revisit those locations and the family adventures that accompanies them whenever I look at the photographs (looking at these photos, I can still remember camping in the desert, sand in our food, and the time the SUV we were using got a flat outside of Medina, one of the holiest sites of Islam - and only open to Muslims - and my Dad and a couple of other Arabic-speaking members of our group gaving the flat tire and a bunch of money to a guard to the city and waited for several hours, hoping he'd bring back a new-ish tire.  Luckily the guard returned with a new tire, or we'd probably still be there!).  That said, my husband will tell you that I'm a bit of a pain in the neck when we are watching the Tour de France, because when they show historical sites, I'm frequently saying "I've been there!", and then regale him with tales of my travels.

Anyway, a few weeks ago I finally took the time to do a walking tour of historical Park City (well, Main Street). I've lived in Park City for almost years, and in Utah for more than 25 years, but I had never really looked at Main Street as any place more than somewhere to avoid during Sundance, and to take friends and family for dinner when they come to visit.  Sort of silly for someone who loves history and lives in a mining town that has all sorts of fascinating stories that surround late 19th-century/early 20th-century mining towns.

Totally cool tour, and I have a much greater appreciation and understanding for things that I took for granted.  (Who knew Park City had a China Town? It burned down in the fire of 1898, but it explains why there is a 'China Bridge' section of town - I never really thought about it before, but that's one of those cool little pieces of trivia that I just love.)  I also found some really cool locations for pet photos.  Because honestly, Park City is a pet town, and I can't think of anything better than exploring historical Park City with your pet.  (Mine didn't come with me because the tour was through the Park City History Museum and I couldn't take my dogs with me.  But I am more than happy to pass on my new-found knowledge to you, and you can bring your dogs along!) 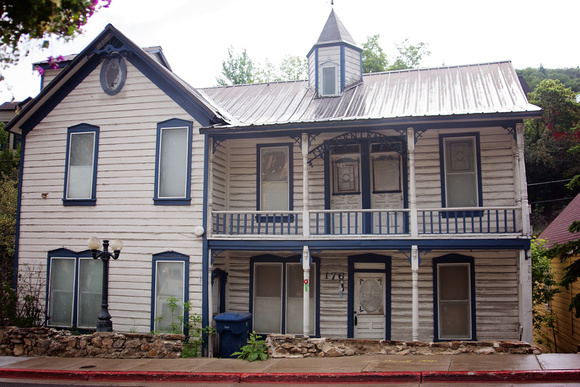 The Centennial, a one-time boarding house for miners (to ostensibly keep them away from the 'evils' of Main Street) 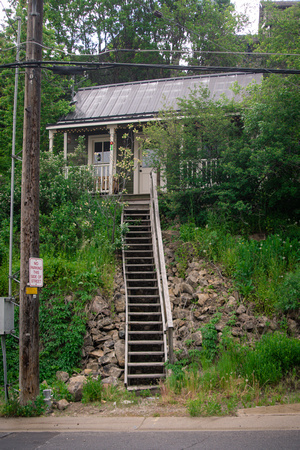 An old miner's cabin. I'm really glad I don't have to shovel those stairs! 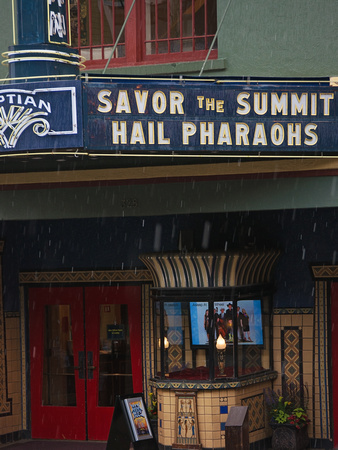 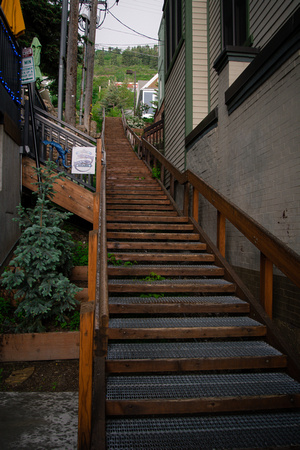 Yet more stairs.  Mining towns have a lot of stairs given that they are in the mountains and everything is either uphill or downhill from everything else! 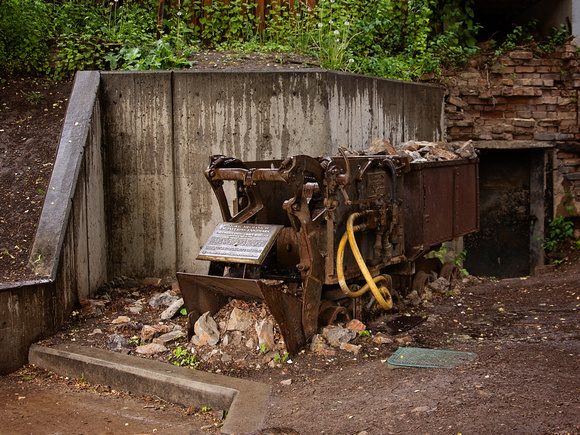 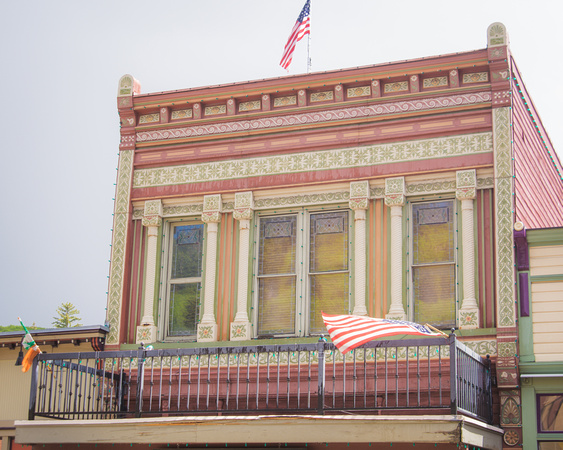 A building with a mail-order front facade.  (Really!)

Yes, Main Street has a lot of high-end shops, restaurants and modern stores, but just underneath the 21st century veneer of Main Street exists the 19th century mining town with brothels and saloons and a Masonic Lodge, as well as over a century of people and the hopes, dreams, loves and goals. History that you can see and feel is fun, exciting, living history!

If you'd like a tour of Park City, pets included, and photos to memorialize the adventure so you can relive it in years to come, contact me at 801-712-3200 or [email protected]  I'd love to share Park City with you!